WASHINGTON (March 1, 2017) — This afternoon, before a joint hearing of the Senate and House Veterans Affairs’ Committees, Brian Duffy, national com 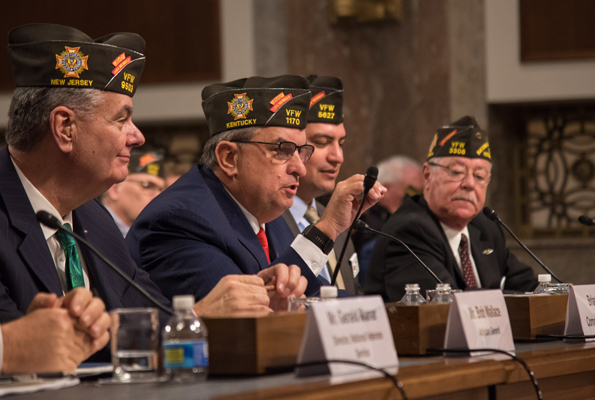 mander of the Veterans of Foreign Wars of the U.S. delivered
testimony focused on fixing the VA and ending sequestration.

“Let me be perfectly clear: Congress must end sequestration!” he told the committee members in attendance.” He explained that despite ongoing conflicts and the rise in new threats since the 112th Congress created sequestration in 2011, America’s service members continue to operate under a budget ax which has adverse effects on how successfully they’re able to defend our nation, as well as quality of life programs.

Duffy also took the opportunity to convey the work the VFW is doing to raise awareness and change the stigma surrounding mental health in America. In addition to the peer-to-peer support every member of the VFW and its Auxiliary provides, he cited the organizations’ partnerships with Give an Hour providers, One Mind researchers, the peer-to-peer group PatientsLikeMe, the family caregiver-focused Elizabeth Dole Foundation, the nation’s largest pharmacy Walgreens, and the Department of Veterans Affairs, while reminding Congress that it, too, has an obligation to fulfill.

“Mental wellness is an ongoing campaign, and we call on Congress to do its part to ensure the VA is properly resourced so that more veterans can obtain timely and quality care,” he said.

The VFW has also worked with numerous organizations over the past two years to evaluate overall VA care and to explore supplemental options. The driving force behind VFW’s recommendations however, has remained feedback from VFW members, thus ensuring its recommendations are aligned with those the system was created to serve.

“The good news is that VFW members across the country are noticing improvements. In the VFW’s latest health care survey, nearly 60 percent of responding veterans noticed an improvement. Some even called their VA facility already great and did not need to be improved.

“Veterans tell us that VA has improved its customer service by being more caring and friendly. Veterans also reported waiting less time for their appointments, and they commended the VA for making several technological advances that have improved the overall patient experience,” Duffy told the committee.

While improvements are being noticed, the VFW continues to urge VA to hire more professionals, improve training, hold wrongdoers accountable, more efficiently execute its workload, and work to update an aging capital infrastructure.

“To be clear, the VFW is not content with maintaining the status quo; however, as high users of the VA health care system, we know that implementing system-wide changes takes time, which is why we were pleased to see the Senate confirm Dr. Shulkin unanimously,” said the national commander.

Duffy went on to suggest needed improvements to the Choice Program to include eliminating the secondary payer requirement and repealing outdated laws that hinder VA’s ability to share medical documentation with private-sector doctors.

Several other key points to Duffy’s testimony included the need to fully expand caregiver benefits, improve VA facilities for women veterans, the VFW’s support for research into presumptive illness and conditions, and protecting the GI Bill.

Video of today’s testimony will be available at www.vfw.org/VFWDC2017 today at 5:30 p.m. (EST), and the text version can be accessed here.

Today’s testimony marks the end of the 2017 VFW Legislative Conference, where approximately 500 VFW leaders traveled to the nation’s capital to discuss various veterans issues, as well as the VFW’s expectations of lawmakers.

A VFW-hosted dinner at the National Press Club for more than 80 wounded, ill and injured warriors and caregivers from Walter Reed National Military Medical Center, along with their families.

Sen. Susan M. Collins (R-Maine) was also presented the VFW Congressional Award this week in recognition of her dedication to quality of life programs for America’s veterans, service members and their families.

Savannah Wittman, sponsored by VFW Post 12118 and its Auxiliary in Copperopolis, Calif., was named the VFW Voice of Democracy competition first-place winner, earning her the T.C. Selman Memorial Scholarship of $30,000.

Lindi M. Compton, sponsored by VFW Post 5813 and its Auxiliary in Greensburg, Ky., earned a $5,000 award when she was named the first-place winner of the VFW’s annual Patriot’s Pen contest.