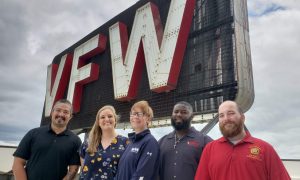 America’s largest and oldest war veterans’ organization began its new membership year earlier this month with almost 1.165 million members, a million less than its peak in 1992, yet significant nonetheless, according to VFW National Commander B.J. Lawrence, who attributes the growth to the organization being more visible on the national scene as well as in more than 6,000 communities in all 50 states, the District of Columbia, four U.S. territories, and 11 foreign countries.

“The VFW is making a difference in the lives of countless others every day, and thanks to the power of social media and the internet, more people are taking notice and wanting to be part of our team,” said Lawrence.

“The internet allows us to share our story of service to others, and social media allows us to engage not only with our members but with potential members, advocates and their families,” he explained. “More people are learning about VFW’s service work, which last year helped 526,000 veterans and transitioning service members to recoup more than $8.3 billion in disability compensation from the Department of Veterans Affairs. They are learning about VFW’s legislative advocacy, which directly benefits all 22 million veterans and military service members, and which has produced the Forever G.I. Bill for our newest generation of warriors, the Blue Water Navy Act for Vietnam veterans, and will soon eliminate the ‘Widow’s Tax’ that is financially penalizing some 65,000 surviving family members of all generations. And they are learning about VFW programs, which range from volunteerism, youth scholarship competitions and student veteran scholarships to financial grants and military unit sponsorships,” he said.

“The VFW is all about service to others,” said Lawrence. “That’s what our founders envisioned when they birthed the organization in 1899, and that’s what they made a certainty in 1919 when the VFW became the first veterans’ organization to open an office in our nation’s capital to petition our government for veterans’ rights and to ensure our government delivered. The decision to open the VFW Washington Office one century ago this year was the direct result of World War I veterans returning to the same government neglect as VFW’s founders encountered two decades earlier.

“Thanks to a robust membership and a 120-year relevance that spans generations, the VFW will continue to make a difference in the lives of others every day, because the programs and services we provide are needed just as much now as they were then,” he said.

To learn more about the VFW or to join, go to vfw.org.

About the VFW: The Veterans of Foreign Wars of the U.S. is the nation’s largest and oldest major war veterans organization. Founded in 1899, the congressionally-chartered VFW is comprised entirely of eligible veterans and military service members from the active, Guard and Reserve forces. With more than 1.6 million VFW and Auxiliary members located in 6,200 Posts worldwide, the nonprofit veterans service organization is proud to proclaim “NO ONE DOES MORE FOR VETERANS” than the VFW, which is dedicated to veterans’ service, legislative advocacy, and military and community service programs. For more information or to join, visit our website at vfw.org.