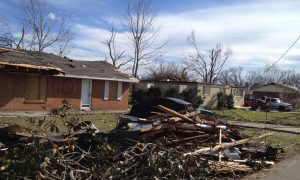 reign Wars of the United States is a pillar in every community across the nation, especially in times of need. VFW Post 3036 in Hattiesburg, Miss., is proving that point after a tornado ripped through eight Mississippi counties last weekend, leaving more than 700 homes destroyed or severely damaged.

VFW Post 3036 is working with local leadership as well as VolunteerHattiesburg, the city’s disaster response organization, to help organize efforts and fully assess the communities’ needs. The VFW is coordinating housing needs and providing volunteers with meals, water, and the materials necessary for rebuilding. Among the many local and out-of-state volunteers are more than three dozen from Team Rubicon.

“It’s a privilege to work with Team Rubicon because of their dedication and efficiency in addressing community needs,” said George Herrington, senior vice commander of Post 3036. “Together with Home Depot and community leaders, we’re rapidly recovering from a terrible situation.”

Post leadership contacted each member in the wake of the storm to assess their individual needs. Unfortunately, one member has been displaced by the storm, but Herrington and other VFW members are providing her with the support she needs.

“VFW Post 3036 is proving they are a strategic asset in their community,” said VFW National Commander Brian Duffy. “I am proud of their service to others in a time of devastating need, and I hope to recognize them properly at our national convention in New Orleans in July.”

ABOUT THE VFW: The Veterans of Foreign Wars of the U.S. is the nation’s largest and oldest major war veterans organization. Founded in 1899 and chartered by Congress in 1936, the VFW is comprised entirely of eligible veterans and military service members from the active, Guard and Reserve forces. With nearly 1.7 million VFW and Auxiliary members