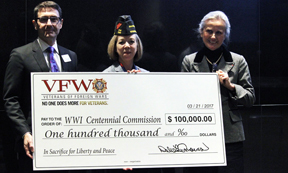 sion in support of the upcoming “Centennial
Commemoration of the U.S. Entry into World War I” event on April 6. The donation represents the VFW’s long-standing dedication to ensuring the service and sacrifice of America’s service men and women are never forgotten.

“Since our founding in 1899, the VFW has proudly supported and welcomed home every generation of servicemen and women who served overseas, to include tens of thousands of Great War veterans who played an integral part in shaping and leading our great organization for decades to come,” said VFW National Commander Brian Duffy. “We are proud to be a presenting sponsor of this commemoration ceremony, which fittingly takes place at the National World War I Museum and Memorial in the heart of Kansas City, just blocks from the VFW’s national headquarters.”

“For nearly 118 years, the VFW has worked to ensure all who protect our country receive the recognition they deserve,” said Anderson. “As a World War I Commemorative Partner, the VFW and its network of 1.7 million VFW and Auxiliary members are dedicated to preserving the history and importance of the Great War.”

The April 6 event will tell the compelling story surrounding America’s entry into World War I a century ago, and is being held at the National World War I Museum and Memorial in Kansas City, Mo. More information on WWI centennial events can be found at ww1cc.org/events.