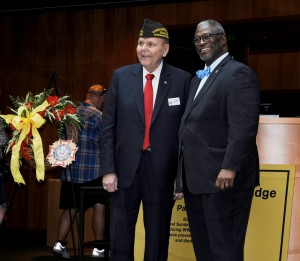 KANSAS CITY, Mo. (May 20, 2016) – Veterans of Foreign Wars of the United States National Commander John A. Biedrzycki Jr. and Kansas City Mayor Sly James took part in a wreath laying ceremony at the National World War I Museum today to commemorate the 100th anniversary of the deployment of the Lafayette Escadrille.

The Lafayette Escadrille was a French fighter squadron comprised of American volunteer pilots during World War I. The United States wouldn’t officially enter the war until 1917.

“It’s important to the VFW to pay tribute to all who serve to protect our country, as well as our allies,” said Biedrzycki, who leads nearly 1.7 million members of the VFW and its Auxiliaries. “I can’t think of a more fitting opportunity to honor this volunteer American air unit than to pay tribute to them at the National World War I Museum and Monument, which is located very near the VFW’s own national headquarters.”

Today’s event, led by Biedrzycki and James, also served to reinforce the collective support the City of Kansas City and the VFW have built for area veterans.

“We value the commitment and sacrifices of our military men and women who have served our country and believe that service should continue to be honored,” said Mayor James. “Here in Kansas City, we are honored to have the World War I Museum and Memorial to preserve the legacy of so many brave veterans, and to share that rich history with visitors from across the nation.”

Before the event concluded, the VFW national commander presented the mayor a commemorative coin set to honor his service and contributions to local veterans, service members and their families as a member of the Marine Corps, and afterwards as an elected official.

The event was attended by a group of 50 VFW members and supporters, whose dedication to veterans earned them a trip to the VFW National Headquarters and the opportunity to explore Kansas City.