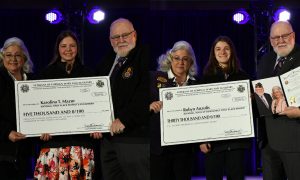 WASHINGTON (March 6, 2018) – The Veterans of Foreign Wars of the U.S. is proud to announce the national winners of its 2017-18 Voice of Democracy and Patriot’s Pen youth scholarship competitions. The winners were announced live during last night’s Parade of Winners at the 2018 VFW Legislative Conference in Washington, D.C.

The Voice of Democracy audio-essay program celebrated its 71st year with nearly 40,000 students weighing in on this year’s theme, “American History: Our Hope for the Future.” Robyn Anzulis, sponsored by VFW Post 10076 and its Auxiliary in Mt. Airy, Md., received an all-expense-paid trip to Washington, D.C., where she was presented with the $30,000 T.C. Selman Memorial Scholarship award and delivered her first-place essay.

For 23 years, the Patriot’s Pen essay program has fostered patriotism by allowing students in grades 6-8 the opportunity to examine America’s history, along with their own experiences in modern American society based on an annual theme. 2018 first-place winner Karolina Mazur, sponsored by VFW Post 521 and its Auxiliary in Owings Mills, Md., received an all-expense-paid trip to Washington, D.C., where she accepted a $5,000 award and delivered her winning essay on this year’s theme, “America’s Gift to My Generation.”

“Our Voice of Democracy and Patriot’s Pen programs are a very sacred part of our organization,” said VFW National Commander Keith Harman. “The VFW believes our nation’s future lies in the hands of America’s youth, and if we empower our youth and demonstrate how to honor, respect and show compassion for their fellow man and country, not only will they have a greater sense of patriotism, they’ll become better citizens and greater leaders for future generations.”