KANSAS CITY, Mo. (May 12, 2017) – The Veterans of Foreign Wars of the U.S. is proud to announce its selection of three teachers in its 2017 Smart/Maher VFW National Citizenship Education Teacher Award contest. 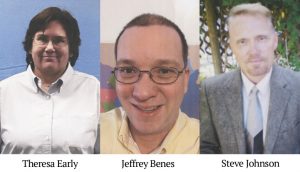 Representing the middle school level, Jeffrey Benes, an Iraq War veteran and a seventh-grade geography teacher at Antioch Middle School in Gladstone, Mo., was chosen for his involvement in the school’s Veterans Day program, annual field trips to the National World War I Museum, and his dedication to encouraging his students to understand and be active in the political process. Benes is also a VFW Life member of VFW Post 7397 in Lenexa, Kan.

Steve Johnson, a science teacher at Churchill County High School in Fallon, Nev., was selected at the high school level for constructing a Wall of Heroes in the classroom to recognize local veterans and several former students currently in the military, and for organizing students and the community to collect, assemble and mail care packages to troops.

Each teacher will receive an all-expense-paid trip to New Orleans, La., where they will be presented with a $1,000 award for professional development and $1,000 for their school during the 118th VFW National Convention, July 22-26.

“Teachers like Theresa, Jeffrey and Steve are vital to ensuring today’s students become a great generation of leaders with a sense of pride and responsibility for our nation,” said VFW National Commander Brian Duffy. “This year’s recipients exemplify this responsibility by creating energetic, passionate and civically-minded environments in their classroom year-round.”

Cosponsored by past VFW National Commander John Smart and retired VFW Quartermaster General Larry Maher, the Smart/Maher VFW National Citizenship Education Teacher Award was established in 1999 to recognize three exceptional teachers for their outstanding commitment to teach Americanism and patriotism to their students. Recipients are selected from entries submitted by local VFW Posts in the U.S. and overseas areas. The entries detail a local teacher’s act of promoting civic responsibility, flag etiquette and patriotism in the classroom.