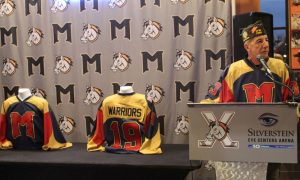 KANSAS CITY, Mo. (February 1, 2019) – During its recent Military Appreciation Weekend, the Kansas City Mavericks, along with fans, raised an impressive $7,745 for the Veterans of Foreign Wars of the U.S. (VFW), a Kansas City-headquartered nonprofit who specializes in veterans, military and community service programs.

Today, the VFW is proud to announce it will donate those proceeds to the Kansas City Warriors hockey team who took the ice in its first exhibition game last Saturday against the Minnesota Warriors at Silverstein Eye Centers Arena.

The Kansas City Warriors is a new organization operating under the mentorship and guidance of the Minnesota Warriors, an established program with 10 years of proven success and a leader in the disabled veteran’s hockey community who operates in conjunction with the USA Disabled Hockey Program. Both Warriors teams are comprised of disabled American veterans who find healing through the sport.

“We want to thank all the fans who came out in support of the Mavericks and Warriors, and for their generosity. It’s clear this is a community that cares about our veterans,” said B.J. Lawrence, VFW National Commander. “After meeting with some of the Warriors’ players and hearing the stories of the adversity they’ve had to overcome, then watching their strength on the ice, we are proud to pass the donation along to this budding organization.”

Fans contributed donations via Chuck-a-Puck events, a live jersey auction and specialty tickets purchases. This is the second year the VFW and the Mavericks have joined together in support of Military Appreciation Weekend.

“We are proud to partner with the VFW to support military service members and their families. As an organization, we’d like to thank all current and former service members. We are excited to see the Kansas City Warriors Hockey program grow, and to continue to provide an outlet for these American heroes to have a therapeutic release through the game of hockey,” said Brent Thiessen, President and General Manager of the Kansas City Mavericks.