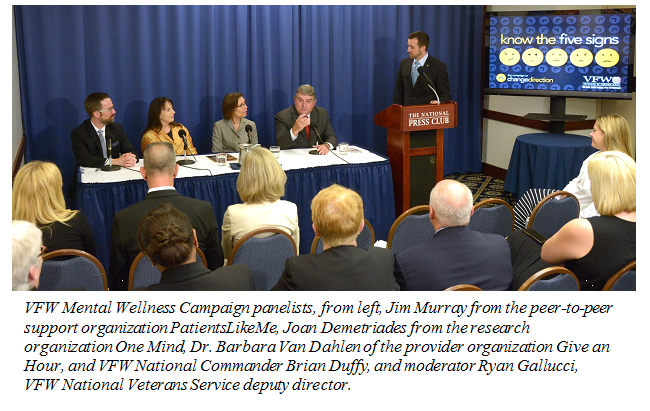 Campaign aims to raise awareness, improve research and much more

WASHINGTON (September 15, 2016) — The Veterans of Foreign Wars of the United States on Tuesday officially announced at the National Press Club in Washington, D.C., its campaign to reduce the stigma surrounding mental health – for veterans and non-veterans alike.

“All of our members at one point were at the pointy end of the spear,” Duffy said. “All of them know first-hand what it means – no matter what generation, no matter what we called it back then, whether it was shell shock or PTS, PTSD, they all know the challenges.

“So we bring an organization that has a lot of resources, not only physical brick and mortar, but the folks themselves, the 1.7 million members who are ideally suited to partner up with the organizations that are up here to lead the fight.”

The organizations will work with VFW and the VFW Auxiliary to “raise awareness, foster community engagement, improve research and provide intervention for those affected by invisible injuries and emotional stress,” said Ryan Gallucci, deputy director of VFW’s National Veterans Service, who moderated the event.

Give an Hour has provided free mental health care to service members and their families for 11 years by “harnessing civilian mental health professionals and asking them to step up and give service, give their time to provide care,” according to Van Dahlen. The nonprofit also launched its Campaign to Change Direction nearly two years ago in an effort to “change the greater culture” surrounding mental health.

This year, VFW will partner with Give an Hour for “A Day to Change Direction” on Oct. 8 – a day in which VFW Posts can host training sessions or perform community service. A key component of the campaign is to make communities aware of the five signs of emotional suffering: personality change, agitation, withdrawal, poor self-care and hopelessness.

One Mind, a five-year-old nonprofit, aims to reduce the stigma surrounding mental health.

PatientsLikeMe is a web-based organization that is an “online research and resource for patients to utilize.” It allows them to learn about their condition, connect with others, track the progression of the condition and share information about their own journey.

For more information regarding “A Day to Change Direction,” contact Lynn Rolf at lrolf@vfw.org. For full coverage of VFW’s mental wellness campaign, read the January 2017 issue of VFW magazine.

About the VFW: The Veterans of Foreign Wars of the U.S. is the nation’s largest and oldest major war veterans organization. Founded in 1899 and chartered by Congress in 1936, the VFW is comprised entirely of eligible veterans and military service members from the active, Guard and Reserve forces. With nearly 1.7 million VFW and Auxiliary members located in more than 6,600 Posts worldwide, the nonprofit veterans service organization is proud to proclaim “NO ONE DOES MORE FOR VETERANS” than the VFW, which is dedicated to veterans’ service, legislative advocacy, and military and community service programs. For more information or to join, visit our website at www.vfw.org.