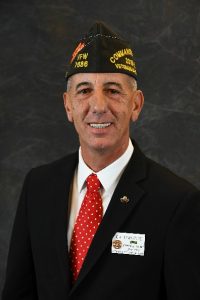 KANSAS CITY, Mo. (July 25, 2018) — Vincent “B.J.” Lawrence, of Alamogordo, N.M., was elected today as the new national commander of the 1.2 million-member Veterans of Foreign Wars of the United States, a congressionally-chartered veterans service organization comprised of eligible veterans and military service members from all five branches of the armed forces.

VFW membership eligibility requires honorable service in a war or expedition on foreign soil or in hostile waters. Lawrence served in the U.S. Army from 1983 to 1986 and earned his eligibility by serving in South Korea, where an armistice, or cease-fire agreement, has existed since July 27, 1953, and where war could erupt at a moment’s notice. He joined VFW Post 7686 in Alamogordo, N.M., in 2000, and immediately began moving the organization forward into the new millennium. He has proven to be a highly effective and dynamic leader, serving in a myriad of critical leadership positions, to include being elected commander at every level of the organization. His theme for the year and challenge to the $102 million nonprofit organization is to “Make It Happen.”

He said “everything the VFW wants costs money, but everything the VFW wants is for someone else.” Through donations and corporate partnerships, the organization has provided more than $10 million in financial grants to help almost 9,000 veteran and military families through tough times since 2004. It has awarded almost $5 million in educational grants since 2014 to help more than 1,100 veterans and military service members to complete their degrees, and its youth patriotic scholarship competition, which drew some 133,000 middle and high school entries this year, awarded $3 million to local, state and national winners. The VFW national organization also testified before Congress more than three dozen times this year to improve quality of life programs and healthcare for veterans, service members and their families, and VFW’s nationwide cadre of trained and accredited service officers helped more than 500,000 veterans to recoup $7.7 billion in disability compensation from the Department of Veterans Affairs in 2017.

Aiding VFW’s corporate relationships is its VFW Foundation, an IRS 501(c)(3) charity that earlier this month was awarded a coveted four-star rating by Charity Navigator, which sets the Foundation apart from its peers and demonstrates to the public its trustworthiness.

For all the organization already does for others every day, Lawrence now wants the 1.2 million-member VFW to “Make It Happen” even more in every community across the nation and world. “There’s an energy in this organization that’s just chomping at the bit to be released,” he said in his acceptance speech today at the Kansas City Convention Center. “It comes from a younger generation who wants to get their hands dirty out in their communities, and it comes from an older generation who knows that the way we did things in the past no longer works, but whose experience and knowledge remains valuable.”

The new VFW national commander is also putting a new focus on supporting the 6,400 existing VFW Posts, on creating new Posts, and on recruiting and retention of new members, as well as remaining focused nationally on ending sequestration, fixing the VA, and recovering missing and unaccounted-for service members from all wars.

Click here to watch and read his acceptance speech.

ABOUT THE VFW: The Veterans of Foreign Wars of the U.S. is the nation’s largest and oldest major war veterans organization. Founded in 1899, the congressionally-chartered VFW is comprised entirely of eligible veterans and military service members from the active, Guard and Reserve forces. With 1.7 million VFW and Auxiliary members located in 6,400 Posts worldwide, the nonprofit veterans service organization is proud to proclaim “NO ONE DOES MORE FOR VETERANS” than the VFW, which is dedicated to veterans’ service, legislative advocacy, and military and community service programs. For more information or to join, visit our website at www.VFW.org