VFW to Congress: ‘Repeal Sequestration Once and for All’

VFW to Congress: ‘Repeal Sequestration Once and for All’

WASHINGTON (March 7, 2018) – This morning, before a joint hearing of the Senate and House Veterans’ Affairs Committees, the Veterans of Foreign Wars of the U.S. delivered testimony focused on ending sequestration and improving the care, services and programs provided by the Department of Veterans Affairs. 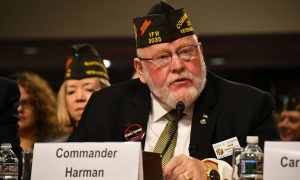 “The VFW is pleased Congress recently passed a bipartisan budget agreement to alleviate the sequester’s impact on our military and veterans, but you only delayed its return by two years,” VFW National Commander Keith Harman told members of the committees. “Our service members, veterans and their families are counting on you to repeal sequestration once and for all!”

“In addition, any bill to improve how veterans’ access private-sector care must also correct problems at VA medical facilities,” said Harman. “This is why the VFW calls on Congress to pass the Caring for Veterans Act of 2017, which would ensure veterans have timely access to high-quality health care that is tailored to their unique needs.”

Harman also conveyed the VFW’s strong support for the full expansion of caregiver benefits to veterans of all eras, stating “As a multigenerational organization with roots tracing back to the Spanish-American War, and with members from every war and contingency operation through Iraq, Afghanistan and Syria, the VFW believes it is disgraceful that Congress has failed to properly recognize the sacrifices of those who have put their lives on hold to care for their pre-9/11 veterans.”

The VFW national commander went on to note the VFW’s support of several “common sense” proposals included in the president’s budget, such as closing the loophole which allows flight schools to charge exorbitant fees for flight training and authorizing VA doctors to practice medicine across state lines.

Several other key points in Harman’s testimony included the VFW’s support for VA’s adoption of the same electronic health care record as the Department of Defense, providing VA the resources it needs to meet the demand on its mental health services, and working to ensure women veterans have access to health care and services designed to fit their needs.

Video of today’s testimony will be available at www.vfw.org/VFWDC2018/ today at 2 p.m. EST, and the written version can be accessed here.

Today’s testimony marks the end of the 2018 VFW Legislative Conference, where approximately 500 VFW leaders traveled to the nation’s capital to discuss various veterans’ issues, as well as the VFW’s expectations of lawmakers.

Other notable events from this year’s conference included:

About the Veterans of Foreign Wars: The Veterans of Foreign Wars of the U.S. is the nation’s largest and oldest major war veterans organization. Founded in 1899, the congressionally-chartered VFW is comprised entirely of eligible veterans and military service members from the active, Guard and Reserve forces. With nearly 1.7 million VFW and Auxiliary members located in 6,400 Posts worldwide, the nonprofit veterans service organization is proud to proclaim “NO ONE DOES MORE FOR VETERANS” than the VFW, which is dedicated to veterans’ service, legislative advocacy, and military and community service programs. For more information or to join, visit our website at www.VFW.org.