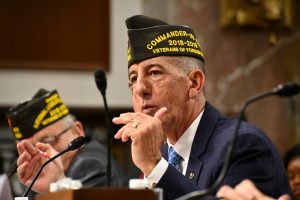 WASHINGTON (March 6, 2019) – This morning, during testimony before a joint hearing of the Senate and House Veterans’ Affairs Committees, the Veterans of Foreign Wars of the U.S. called for full congressional oversight over the implementation of the VA MISSION Act of 2018.

The organization made clear its dissatisfaction with the Department of Veterans Affairs’ implementation thus far, citing arbitrary and misguided decision-making.

With more than 80 percent of VFW members relying on VA health care, and dedicating more than 10 million volunteer hours annually to supporting their fellow veterans at VA medical facilities, the VFW’s views were actively solicited while drafting the legislation, but the organization has not been engaged to ensure its efficient implementation.

“Unlike appeals modernization, VA has elected to largely ignore the views of the nation’s largest war veterans’ organization when drafting rules to implement the VA MISSION Act,” said VFW National Commander B.J. Lawrence, who leads the more than 1.6 million members of the VFW and its Auxiliary.

“VA executive leadership should be embarrassed that they have discontinued VA’s strong collaborative relationship with the VFW and chosen to make arbitrary decisions without consulting those who most intimately understand VA’s mission and the needs of the veterans’ community.”

Lawrence went on to state that through its lackluster implementation, VA has betrayed its vow to care for veterans and ignored the lessons learned from the Veterans Choice Program.

He also called on Congress to return earned disability benefits to some 90,000 Blue Water Navy veterans, a move failed by the 115th Congress.

“VA cannot continue to deny assistance for veterans who are sick and dying from Agent Orange-related diseases. To ensure Blue Water Navy veterans never have their earned benefits arbitrarily stripped away again, this Congress must pass the Blue Water Navy Vietnam Veterans Act.”

The VFW did commend the committees for joining the VFW in opposing the privatization of VA care, and reiterated that it will fight any attempt in that direction.

Lawrence also reminded committee members that the VFW has led or played a key role in every reform and/or expansion of veterans benefits to include modernization of the VA appeals process. And while the new process has the best interest of veterans at the forefront and alleviates the requirement that veterans wait approximately five years for decisions, the VFW will continue to keep a watchful eye on the processes.

“With more than 2,100 accredited service officers who last year assisted 526,000 veterans obtain benefits, we will keep a close eye on how Regional Offices and the Board of Appeals perform under the new framework and help VA address any unintended consequences,” said Lawrence.

“Specifically, VA must properly address the legacy appeals backlog and improve quality so veterans get quick and accurate decisions on their claims, instead of poorly developed decisions that are immediately appealed.”

“Suicide is a serious issue. We must do what is needed to save the 20 veterans who take their own lives –– every day,” he remarked.

He added that VA must consider how complementary and alternative therapies can help veterans cope with PTSD and other conditions such as chronic pain.

Several other key points made during today’s testimony included the call to end sequestration, the demand of Congress to pass the Burn Pits Accountability Act, enact concurrent receipt of retirement pay and service-connected disability compensation, and improve gender-specific care for women veterans.

Video of today’s testimony is available at vfw.org/VFWDC2019, and the written version can be accessed here.

Today’s testimony marks the end of the 2019 VFW Legislative Conference, where approximately 500 VFW leaders traveled to the nation’s capital to discuss various veterans’ issues, as well as the VFW’s expectations of lawmakers.

Other notable events from this year’s conference include: