WASHINGTON (March 5, 2019) – Last night the Veterans of Foreign Wars of the U.S. proudly presented $209,000 in scholarships and awards as it named the national winners of its annual Voice of Democracy and 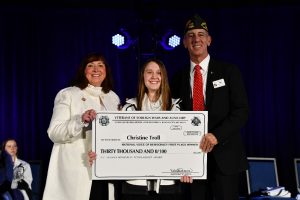 Patriot’s Pen youth scholarship competitions. The winners were announced during the Parade of Winners ceremony at the 2019 VFW Legislative Conference in Washington, D.C.

Together, the VFW’s Voice of Democracy and Patriot’s Pen scholarship competitions have helped foster patriotism by challenging middle and high school students to examine our nation’s history, its democratic processes, and their roll in America’s future based on an annual theme.

More than 40,000 high school students addressed this year’s “Why My Vote Matters” theme, and last night Christine Troll was named the Voice of Democracy first-place national winner where she received the $30,000 T.C. Selman Memorial Scholarship award and delivered her winning essay. Troll, a senior, was sponsored by VFW Post 554 and its Auxiliary in Somerset, Pa.

Second-place winner Kyle Polen, a senior sponsored by VFW Post 9400 and its Auxiliary in Phoenix, Ariz., was awarded the $16,000 Charles Kuralt Memorial Scholarship, while Andrew Dodd, a senior sponsored by VFW Post 10061 in Lake Hurst, N.J., was named the third-place winner and awarded the $10,000 VFW Scholarship. All other state winners received at least a $1,000 college scholarship. See the complete list of 2019 Voice of Democracy national winners.

“Raising today’s youth to be patriotic, civically minded Americans is vital to ensuring a prosperous future for our nation,” said VFW National Commander B.J. Lawrence. “The VFW’s Voice of Democracy and Patriot’s Pen competitions help mold today’s students into the strong and great leaders we’ll need tomorrow. We believe the nearly $3 million presented in national and local scholarships and awards this year will help open doors to a bright, promising future for these young people and America.”

In addition to taking home a college scholarship, all 53 Voice of Democracy state winners were surprised to learn they would also take home a new laptop, courtesy of Dell. Dell representatives Kelsy Parks, senior 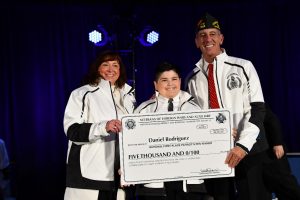 strategic account manager and Aron Waisman, senior manager of business development were on hand to present the laptops.

Also present at last night’s ceremony was 2019 Patriot’s Pen first-place winner Daniel Rodriguez. Sponsored by VFW Post 2066 in Nogales, Ariz., Rodriguez received the all-expenses-paid trip to Washington, D.C., where he accepted a $5,000 award and delivered his winning essay on this year’s theme, “Why I Honor the American Flag.”