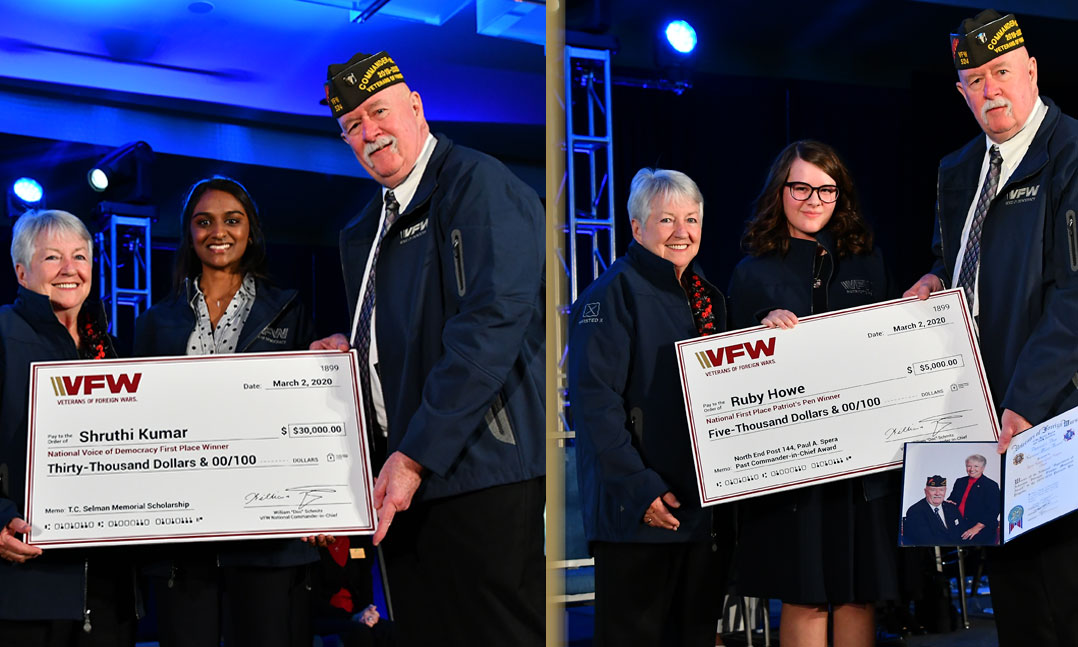 WASHINGTON (March 2, 2020) – The Veterans of Foreign Wars (VFW) tonight proudly presented more than $200,000 in scholarships and awards as it named the national winners of its 2020 Voice of Democracy and Patriot’s Pen youth scholarship competitions. The awards were presented during the Parade of Winners ceremony, sponsored by Twisted X, at the VFW’s annual Legislative Conference held in Washington, D.C.

Shruthi Kumar, a high school senior from Marian High School in Omaha, Nebraska, was named the first place winner and presented with the $30,000 T.C. Selman Memorial Scholarship award during this evening’s ceremony where she delivered her winning essay on this year’s theme, “What Makes America Great.” Kumar was sponsored by VFW Post 1581 in Omaha, Nebraska.

“The more than $200,000 awarded tonight makes a grand total of $3 million presented at the national, state and local levels of our competitions, and I know will help ensure the doors of opportunity are opened wide for this talented group of young people,” said VFW National Commander William “Doc” Schmitz. “Even after 73 years, the VFW remains committed to ensuring America’s youth develop a strong sense of patriotism and civic duty to become the great leaders our future will need, because who knows, in the room tonight could be a future Supreme Court justice, senator, or even our future president of the United States of America.”

In addition to taking home a college scholarship, the VFW surprised all of the Voice of Democracy state winners when it announced they would also receive a new laptop, courtesy of Dell. Aron Waisman, Dell senior manager of business development, and Chris Pringle, Dell strategic account manager, were on hand to make the announcement.

Also present at last night’s ceremony was the 2020 Patriot’s Pen first place winner, Ruby Howe. Sponsored by VFW Post 334 and its Auxiliary in Lake Orion, Michigan, Howe received the all-expenses-paid trip to Washington, D.C., where she accepted a $5,000 award and delivered her winning essay.

About the VFW: The Veterans of Foreign Wars of the U.S. is the nation’s largest and oldest major war veterans organization. Founded in 1899, the congressionally-chartered VFW is comprised entirely of eligible veterans and military service members from the active, Guard and Reserve forces. With more than 1.6 million VFW and Auxiliary members located in over 6,000 Posts worldwide, the nonprofit veterans service organization is proud to proclaim “NO ONE DOES MORE FOR VETERANS” than the VFW, which is dedicated to veterans’ service, legislative advocacy, and military and community service programs. For more information or to join, visit our website at vfw.org.