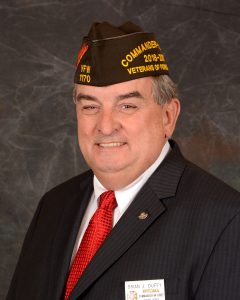 NEW ORLEANS – July 25, 2017 – Today marks the last time that Brian Duffy will address the VFW Auxiliary as VFW Commander-in-Chief. He will be escorted down the Aisle of Honor and then address the VFW Auxiliary delegation. Duffy served in the U.S. Air Force as a jet engine mechanic on an F-4 “Phantom” fighter aircraft, and later transitioned and served as a flight engineer on the C-141 “Starlifter” transport aircraft. During his service, he deployed to several campaigns including Grenada, Panama and Desert Shield/Storm. Among his numerous military decorations, he has been awarded the Armed Forces Expeditionary Medal, Air Force Commendation Medal, Southwest Asia Service Medal and the Kuwait Liberation Medal. He is also a recipient of the Air Medal for actions in Desert Storm.

Duffy was instrumental this year in working with the Campaign to Change Direction to bring the Five Signs of mental illness to the forefront of the organization, as members work to bring awareness and help for veterans and the military suffering from mental health issues.

Keynote speaker Jeanne Robertson will then bring her signature humor to the stage to entertain and inspire members for the year ahead. Learn more about award-winning speaker Robertson at jeannerobertson.com.

Approximately 2,500 members are attending Convention, which runs through tomorrow.