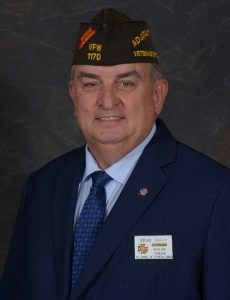 KANSAS CITY, Mo. (July 27, 2017) — Brian Duffy was appointed adjutant general of the Veterans of Foreign Wars of the U.S. yesterday at the 118th VFW National Convention in New Orleans, La. His appointment comes immediately following a year-long term as the national commander of the more than 1.2 million-member organization. He also becomes the first Desert Storm veteran to hold the position, which is similar in duties to any corporate chief executive officer.

Duffy retired from a successful 27-year career with United Parcel Service (UPS) airlines in 2014, having held the titles of flight engineer instructor, instructor/check captain on Boeing 757 and 767 aircraft, and ultimately, assistant chief pilot. He will now oversee the day-to-day operations of the nation’s largest organization of combat veterans.

During his time as VFW national commander, Duffy started several new initiatives to support the VFW’s multifaceted approach to serving America’s veterans, service members and their families, as well as their communities. This included new and expanded grants to VFW Posts to boost community service efforts, an expanded relationship with Student Veterans of America, and a nationwide, ongoing campaign to raise awareness and to combat the stigma surrounding seeking mental health care.

“I’m honored to take on the new challenge of serving the VFW as its adjutant general,” said Duffy. “Having just finished a year visiting with our service members at home and abroad, hearing from them firsthand on what programs and benefits are working for them and what are not, has given me great perspective. I look forward to applying that perspective to the daily operations of the VFW.”

The VFW’s new adjutant general served in the U.S. Air Force as a jet engine mechanic on F-4 Phantom fighter aircraft, and later as a flight engineer aboard C-141 Starlifter transport aircraft. He deployed in support of several campaigns, to include Grenada, Panama, and Operations Desert Shield and Storm in Southwest Asia. His military decorations include the Air Medal, Armed Forces Expeditionary Medal, Southwest Asia Service Medal, and the Kuwait Liberation Medal.

Duffy has a longstanding history of service both to his country and within his community. He joined the VFW in 1983. His Honor Flight activities were recognized by the Kentucky Aviation Hall of Fame, the Kentucky Derby Festival as the 2009 “Thundernator,” and was a recipient of the 2011 (Louisville) WLKY “Bell Award” for community volunteerism. In 2012, he was the recipient of President Obama’s Volunteer Service Award after being nominated by UPS to recognize his numerous volunteer activities.

He is a Gold Legacy Life member of VFW Post 1170 in Middletown, Ky.

ABOUT THE VFW: The Veterans of Foreign Wars of the U.S. is the nation’s largest and oldest major war veterans’ organization. Founded in 1899 and chartered by Congress in 1936, the VFW is comprised entirely of eligible veterans and military service members from the active, Guard and Reserve forces. With nearly 1.7 million VFW and Auxiliary members located in almost 6,500 Posts worldwide, the nonprofit veterans’ service organization is proud to proclaim “NO ONE DOES MORE FOR VETERANS” than the VFW, which is dedicated to veterans’ service, legislative advocacy, and military and community service programs. For more information or to join, visit our website at www.vfw.org.