KANSAS CITY, Mo. (March 22, 2018) – The Veterans of Foreign Wars of the U.S. is proud to name the top three teachers in its 2018 Smart/Maher VFW National Citizenship Education Teacher Award contest. 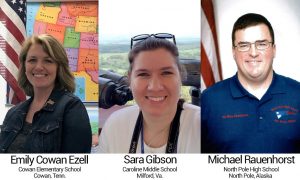 Each year, the VFW selects one teacher from the elementary (K-5), middle (6-8) and high school (9-12) levels to receive the Smart/Maher VFW National Citizenship Education Teacher Award. Established in 1999, the award recognizes our nation’s top teachers for their exceptional commitment to teaching Americanism and patriotism to their students by promoting civic responsibility, flag etiquette and patriotism in the classroom. The award is named after former VFW National Commander John Smart and retired VFW Quartermaster General Larry Maher.

Emily Cowan Ezell, a third-grade teacher at Cowan Elementary School in Cowan, Tenn., was named the elementary school winner for fostering students’ patriotism through an annual production of her self-written and designed patriotic play, This Is Our Country. Ezell is known for planning annual field trips to military museums, inviting local veterans to visit her classrooms, and for showcasing veterans’ pictures and stories to help ensure patriotism lives year-round in her school.

Representing the middle school level is Sara Gibson, a seventh-grade history teacher at Caroline Middle School in Milford, Va. From spearheading her History Club’s creation of a Korean War Memorial in Caroline County and portraying important historical figures from every era, to leading field trips to local war and military museums, Gibson was chosen for her unique ability to bring history to life, while helping her students understand the service and sacrifice of America’s veterans.

Michael Rauenhorst, an Air Force veteran and aerospace science teacher at North Pole High School in North Pole, Alaska, was selected at the high school level for encouraging community volunteerism, for his leadership of the school’s Air Force JROTC, and his Curriculum in Action tours, which reinforces not only science in the classroom, but encourages citizenship and strengthens student perspectives of aviation and America’s military past, present and future. Rauenhorst is a Life member of North Pole, Alaska, VFW Post 10029.

“Teachers like Emily, Sara and Michael play a vital role in raising our nation’s next generation of leaders as civic-minded patriots,” said VFW National Commander Keith Harman. “The VFW is honored to recognize the dedication and commitment of our nation’s teachers as they help perpetuate the values and freedoms that have made this nation great.”

Each teacher will receive an all-expense-paid trip to Kansas City, Mo., where they will each be presented with a $1,000 award for professional development and $1,000 for their school during the 119th VFW National Convention, July 21-25.

Nominate a teacher you know at your local VFW Post, or find out more information on the Smart/Maher VFW National Citizenship Education Teacher Award.