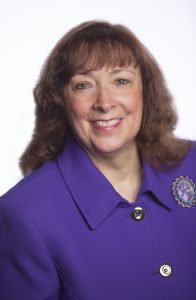 A Life Member of Yingling-Ridgely Auxiliary 7472, she joined on the eligibility of her father, a World War II and Korean War U.S. Army Veteran.

Sandi has served the organization in many capacities, including Auxiliary, District and Department (state) President, for which she was named Outstanding President of the Year for her membership group. On the National level, she was Director for the Cancer Aid & Research, Hospital, and “Buddy”® Poppy programs; she served on the Council of Administration and has also been the National Patriotic Instructor and Eastern Conference Chairman for the Americanism and Membership Programs.

Kriebel will continue to build on the Auxiliary’s foundation by providing guidelines and basic training information for every level of the organization. The Auxiliary will look to increase its overall membership and continue to welcome thousands of male members since its eligibility change in 2015.

The 2018-2019 National Officers of the VFW Auxiliary have been elected as follows: