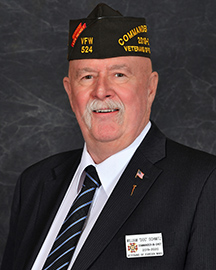 KANSAS CITY, Mo. (July 29, 2019) — William J. “Doc” Schmitz, of Corning, N.Y., has been elected the new leader of the 1.2 million-member Veterans of Foreign Wars of the United States, a congressionally-chartered veterans service organization comprised of eligible veterans and military service members from all five branches of the armed forces.

Schmitz’s election to VFW Commander-in-Chief occurred at the conclusion of the organization’s 120th national convention in Orlando, Fla,. which drew approximately 10,000 veterans, and military family members.

Each year, VFW members from around the globe representing a myriad of conflicts converge at the event. Their mission during the weeklong convention is to approve new national priorities to guide the organization in its advocacy and business efforts throughout the ensuing year.

Schmitz takes office during a time of great momentum for the organization which recently announced its first increase in membership numbers in 27 years, reached a milestone achievement of more than $8.3 billion in benefits and compensation collected from the VA on behalf of veterans, and fought for the successful passage of the Blue Water Navy Vietnam Veterans Act of 2019. Through donations and corporate partnerships, the VFW has also surpassed $11 million in financial grants and $6.5 million in scholarships awarded to veterans, and is celebrating 100 years of its National Veterans Service and National Legislative Service programs which advocate for the best possible quality of life solutions and benefits on behalf of America’s veterans, service members and military families.

Aiding the VFW’s corporate relationships is its VFW Foundation, an IRS 501(c)(3) charity which maintains a coveted four-star rating by Charity Navigator, setting the VFW Foundation apart from its peers and demonstrating to the public its trustworthiness.

VFW membership eligibility requires honorable service in a war or expedition on foreign soil or in hostile waters. Schmitz served in the United States Navy from 1966 to 1970, with deployment to Vietnam as a corpsman attached to United States Marine Corps infantry and artillery. He then joined the VFW in 1971 at Post 524 in Corning, N.Y., where he has served the VFW in many vital leadership positions at the local, state and national levels.

During his tenure as national commander, Schmitz will log thousands of miles across the U.S. and abroad to promote the many objectives of the VFW. His charge to members and supporters the $102 million nonprofit organization over the next year is to “Dare to Care,” calling on individuals to help confront the challenges that hinder America’s service members and families from living their best lives.

About the VFW: The Veterans of Foreign Wars of the U.S. is the nation’s largest and oldest major war veterans organization. Founded in 1899, the congressionally-chartered VFW is comprised entirely of eligible veterans and military service members from the active, Guard and Reserve forces. With more than 1.6 million VFW and Auxiliary members located in 6,200 Posts worldwide, the nonprofit veterans service organization is proud to proclaim “NO ONE DOES MORE FOR VETERANS” than the VFW, which is dedicated to veterans’ service, legislative advocacy, and military and community service programs. For more information or to join, visit our website at vfw.org.