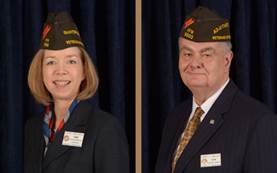 Anderson’s election to the position makes her the first female veteran to hold the position in the organization’s 117-year history. She also joins new VFW National Commander Brian Duffy to be the first Operation Desert Storm veterans to be elected to their respective positions.

After a successful 24-year career in banking in his home state of New Jersey, Wallace joined the administration of former New Jersey Gov. Thomas H. Kean as deputy commissioner/administrator of veterans affairs. Immediately prior to joining the VFW staff, he served as executive director of the New Jersey State Employment and Training Commission. He has also served on a number of state and national committees to improve the quality of life of America’s veterans, military personnel and their families.

Wallace served as a lance corporal with the 1st Battalion, 1st Marines, 1st Marine Division, in Vietnam from November 1967 to June 1968. He is a veteran of the Battle of Hue during the 1968 Tet Offensive, and received three Purple Heart medals for wounds sustained in Vietnam.

He joined the VFW while in Vietnam. In 1979, Wallace was the recipient of the VFW’s Young Veteran of the Year award from both the national organization and the VFW Department of New Jersey. Wallace was the first Vietnam veteran, as well as the youngest veteran, to command the Department of New Jersey from 1980-81. He has served on a variety of state and national VFW committees, to include Legislative, Security, Budget and Finance. He also served on the National Council of Administration.

Wallace is a past VFW commander-in-chief, having served from August 1991 to August 1992. During his term of office, he focused on quality VA health care for veterans and worked for the fullest possible accounting of American Prisoners of War and Missing in Action from the Vietnam War. He continues to travel to Vietnam, Laos and Cambodia to meet with Southeast Asian leaders and to the Russian Federation to help resolve the POW/MIA issue.

He earned a Bachelor of Science degree from Rutgers University and a master’s degree in business administration from Fairleigh Dickinson University. He is also a graduate of the School for Bank Administration at the University of Wisconsin. Bob is a Life member of VFW Post 9503 in Bayville, New Jersey.

She attended the University of Missouri-Columbia on an ROTC scholarship, where she majored in economics. In May 1980 upon graduation, she was commissioned in the Army as an AG (Human Resources) Second Lieutenant. Her military assignments included Nuremberg/Furth, Germany; Fort Harrison, Ind.; Fort Riley, Kan.; Fort Leavenworth, Kan.; and Fort McPherson, Ga. She deployed as part of the division headquarters with the 1st Infantry Division during Desert Storm in December 1990. During her 13 years of service, Anderson was awarded the Bronze Star, Meritorious Service Medal (2), and the Army Commendation Medal (4), among many others. Anderson earned a master’s degree of science in systems management from the University of Southern California in 1989, and is a graduate of the Army’s Combined Arms Services Staff School (CAS3) and Command and General Staff College (CGSC).

Anderson left the Army in 1993 and held a variety of management positions in business from 1993-2007. She joined VFW Post 7356 in Parkville, Mo., in 2006 where she maintains her Legacy Life membership, and has held the positions of Voice of Democracy chair, junior vice commander, senior vice commander, All-American Post commander, trustee and District adjutant. She is also a life member of the VFW Auxiliary and VFW National Home.

ABOUT THE VFW: The Veterans of Foreign Wars of the U.S. is the nation’s largest and oldest major war veterans organization. Founded in 1899 and chartered by Congress in 1936, the VFW is comprised entirely of eligible veterans and military service members from the active, Guard and Reserve forces. With nearly 1.7 million VFW and Auxiliary members located in more than 6,600 Posts worldwide, the nonprofit veterans service organization is proud to proclaim “NO ONE DOES MORE FOR VETERANS” than the VFW, which is dedicated to veterans’ service, legislative advocacy, and military and community service programs. For more information or to join, visit our website at www.vfw.org.