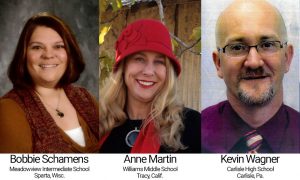 Each year, the VFW names one teacher from the elementary (K-5), middle (6-8) and high school (9-12) levels to receive the Smart/Maher VFW National Citizenship Education Teacher Award. Established in 1999, the award recognizes our nation’s top teachers for their exceptional commitment to teaching Americanism and patriotism to their students by promoting civic responsibility, flag etiquette and patriotism in the classroom. The award is named after former VFW National Commander John Smart and retired VFW Quartermaster General Larry Maher.

Bobbie Schamens, a fourth-grade teacher at Meadowview Intermediate School in Sparta, Wisc., was named the elementary school winner for her efforts in recognizing the service and sacrifice of her hometown’s military families. Schamens’ personal experience as a military spouse has helped her teach students civic responsibility, patriotism and proper flag etiquette. She organizes cards for military care packages and recognizes local military and veteran families with a military tribute case near her classroom. Schamens’ students also visit the state capital to experience history and our government first hand.

Representing the middle school level is Anne Martin, a seventh-grade language arts and social studies teacher at Williams Middle School in Tracy, Calif. She was selected because over her 24-year career, Martin has used her experience as a Gold Star family member to help her students and community better understand the sacrifices made by America’s military and veteran families. Martin’s work includes organizing school-wide campaigns to collect donations and thank you letters for deployed troops, and coordinating the school’s annual Patriot Day celebration which includes a patriotic door-decorating contest. She also oversees the school’s Associated Student Body elections, helping students understand and navigate the democratic process.

Kevin Wagner, an advanced placement history teacher at Carlisle High School in Carlisle, Penn., was chosen to represent the high school level for his dedication to honoring the memory of America’s veterans. Through his “Silent Heroes” project, students explore the life and service of a local World War II veteran killed at Normandy and create a webpage preserving their legacy. Last year Wagner’s project expanded to identify local Vietnam War veterans, leading to the construction of a Vietnam Wall of Honor which displays the names of more than 213 veterans and 10 flag cases in honor of the former students killed during the war.

“In all my years with the VFW, I’ve never come across a group of teachers more committed to recognizing the sacrifices of our service men and women while instilling America’s younger generations with an appreciation and understanding of what patriotism really means,” said VFW National Commander B.J. Lawrence. “We’re honored to recognize teachers like Bobbie, Anne and Kevin who help perpetuate the values and freedoms we hold so dear.”

Each teacher will receive an all-expense-paid trip to Orlando, Fla., where they will each be presented with a $1,000 award for professional development and $1,000 for their school during the 120th VFW National Convention, July 20-24.

Nominate a teacher you know at your local VFW Post, or find out more information on the Smart/Maher VFW National Citizenship Education Teacher Award.