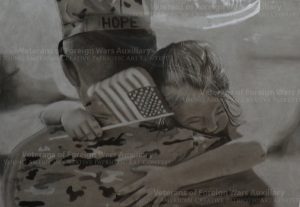 Abbott, of Foley, Ala. attends Foley High School. She was sponsored by VFW Auxiliary 5658, Elberta. “Every day our soldiers place themselves in harm’s way to protect not only the freedoms of the American people, but their families and their home. This soldier has returned home, greeted by his family. His daughter, holding on tight to the father who had been deployed, is holding the banner of our nation. The banner which we fly for our troops. The name Hope represents the hope that we hold onto, that our families will return home to us. We hold firmly onto that hope just as the young girl is holding onto her father. Through the many battles, tears, and home sickness that soldiers endure, the motivation continues to live within the homes of American citizens. Families are allowed to live together in peace, attend churches freely, express their voice, and live in a nation under God.

Visit https://vfwauxiliary.org/scholarships/young-american-creative-patriotic-art-contest to see the winners and read descriptions of their artwork.

Established 1914, members of the Veterans of Foreign Wars of the United States Auxiliary set out to serve the veterans of this country and our communities in honor of the sacrifices and commitment of every man and woman who has served in uniform. The VFW Auxiliary is one of the nation’s oldest veterans’ service organizations and our members are the relatives of those who have served in overseas combat. We have nearly 475,000 members representing all 50 states, the District of Columbia and several foreign-based Auxiliaries who volunteer millions of hours and give millions of dollars to support veterans, military service personnel, and their families.

We are a voice for veterans on Capitol Hill and are instrumental in assisting the VFW pass or block legislation that impacts veterans and their families. We are one of the top ten providers of volunteer hours in the VA medical system. Every year, members fund-raise millions of dollars for charitable projects that benefit veterans and their families. We also provide hundreds of thousands of dollars in scholarships for our nation’s youth. With more than 3,800 Auxiliaries, there is likely one in your area working to improve the lives of America’s uncommon heroes. Learn more at www.vfwauxiliary.org.