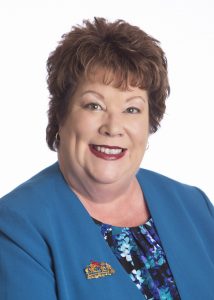 Kansas City, Mo., August 3 – Jean Hamil of Orlando, Florida, was elected to the office of National President of the Veterans of Foreign Wars (VFW) of the United States Auxiliary at its 108th National Convention in Kansas City, Missouri today (August 3).

In her spare time she enjoys quilting, spending time with friends and traveling. She belongs to a small group of “Quilting Angels” who make quilts for veterans at the Orlando VA Healthcare Center, Quilts of Valor-Orange and Seminole counties, for children temporarily located at Safe House and seniors in Seminole County.

Hamil will encourage members to continue Soaring Above & Beyond for our veterans while building on the Auxiliary’s foundation by providing guidelines and basic training information for every level of the organization. The Auxiliary will look to retain its current members while welcoming tens of thousands of new members, including thousands of male members, since its eligibility change in 2015.

The 2021-2022 National Officers of the VFW Auxiliary have been elected as follows:

The National Officers will visit members in communities across America this year, seeing the efforts of Auxiliary volunteers and encouraging non-members to get involved and join the Auxiliary as it works to serve veterans, service members and their families, and spread patriotism nationwide.

About the VFW Auxiliary: The VFW Auxiliary is one of the nation’s oldest veterans’ service organizations and our members are the relatives of those who have served in a location of foreign conflict. We have nearly 470,000 members representing all 50 states who volunteer millions of hours and give millions of dollars to support veterans, military service personnel and their families.

We are a voice for veterans on Capitol Hill and are instrumental in assisting the VFW pass or block legislation that impacts veterans and their families. We are one of the top 10 providers of volunteer hours in the VA medical system. Every year, members fundraise millions of dollars for charitable projects that benefit veterans and their families. We also provide hundreds of thousands of dollars in scholarships for our nation’s youth. With more than 3,600 Auxiliaries, there is likely one in your area working to improve the lives of America’s uncommon heroes. Learn more at www.vfwauxiliary.org.