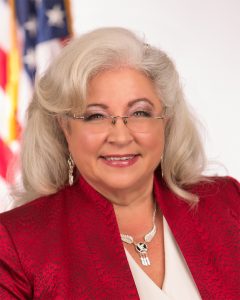 A Life Member of Wilkins-Edwards Auxiliary 176, she joined on the eligibility of her grandfather, who served in the U.S. Army in World War II from 1943-1946 and Korea from 1952-1954. On her 16th birthday, she joined the Auxiliary. Before leaving for college, Guillory served as District Color Bearer and Conductress, and remained a member while attending Virginia Tech.

Guillory has served the organization in many capacities, including Auxiliary, District and Department (state) President, for which she was named Outstanding President of the Year for her membership group. She served several terms as both Treasurer and Secretary for her Auxiliary. On the National level, she was Director for the Legislative, Rehabilitation and Extension programs; she served on the Council of Administration from 2003-2005 and as National Chief of Staff in 2010-2011.

Guillory has a bachelor’s degree in Political Science from Virginia Tech, a master’s degree in Public Administration from Troy University and a master’s in Strategic Planning from the Naval War College. After serving 34 years as a civil servant in the Department of Defense, Guillory retired in July 2013 from the Pentagon where she worked for the Chief of Naval Operations in the Office of Operations, Strategy and Policy. Guillory was honored to have received the Navy’s Civilian Meritorious Award, a Joint Civilian Service Commendation Award, and a Civilian Global War on Terrorism Medal during her career.

Guillory will help usher in a new era of the organization as the Auxiliary tops 50,000 male members since its eligibility change in 2015, as well as the implementation of the new membership software, custom designed for the VFW Auxiliary. She will also celebrate her husband Mark’s Native American heritage with her theme “Catch the Dream for Our Veterans” and dream catcher imagery.

The 2017-2018 National Officers of the VFW Auxiliary have been elected as follows:

The National Officers will visit members in communities across America this year, seeing the efforts of Auxiliary volunteers and encouraging non-members to get involved and join the Auxiliary as it works to serve veterans, their families and spread patriotism nationwide.