Missouri VFW Post Wins $20,000 USAA Giveaway
‘We do a lot here for the community and we can certainly put the money to good work’ 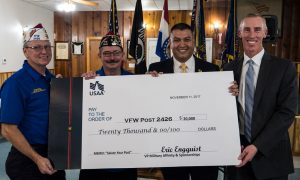 “I entered the drawing to win $20,000 with my Post in mind, never expecting to win of course. So it was a big surprise when I got the call,” said Sweet.

USAA — a longtime supporter of the VFW — launched its Salute Your Post Giveaway in July as a way to give back to VFW Posts that are making a positive impact in their community. Participants simply entered their name into a drawing for the chance to win $20,000 for the Post of their choosing.

“I thought Dennis was joking when he told me he’d won $20,000 for the Post. He really had to work to convince me it was true,” laughed Mel Brinkley, commander of VFW Post 2426.

Like many of the VFW’s nearly 6,400 Posts around the world, Post 2426 is a staple of support in the St. Francois County community, about 70 miles south of St. Louis. It hosts several local scouting initiatives, presents student of the month awards to North St. François County and West County school students, conducts flag folding and education ceremonies, assembles goodie bags for veteran nursing homes and deployed service members, and this year hosted its 24th annual Mineral-area Toy Drive with the Christian Motorcycle Association. The Post also raised more than $15,000 to support a local family of a child born with cancer.

“We do a lot here for the community and we can certainly put the money to good work. But we do everything as a Post, so we’ll work together to decide how to best spend it,” said Brinkley, who noted that electrical and plumbing upgrades would undoubtedly be a discussion point.

Nearly 60 residents, VFW members and community leaders including Missouri State Representative Mike Henderson and a representative from Congressman Jason Smith’s office turned out for the announcement.